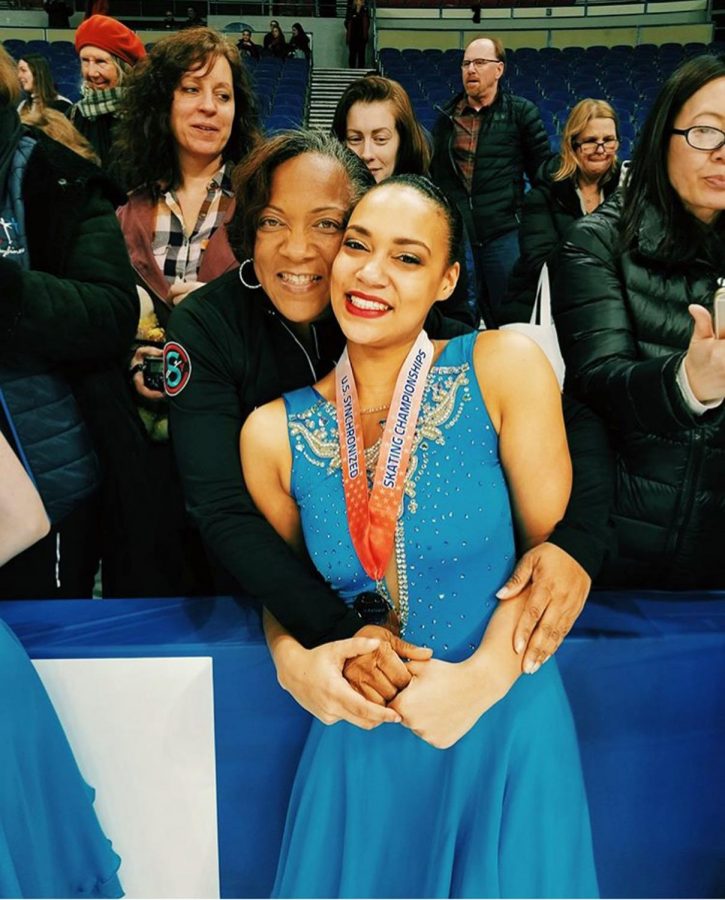 Senior Taylor Blake celebrates, alongside her mom, her qualification for the world championships.

PMHS has a variety of athletic teams that have had success in their respective programs. However, some Pelicans experience their own achievements outside the school. An example of this can be seen in senior Taylor Blake, a member of the Skyliners skating team, which has earned its reputation as one of the elite skating programs in the US. Their most recent competition at nationals in Portland, Oregon booked Skyliners and Taylor a trip to the USFSA (United States Figure Skating Association) World Championships in Stockholm, Sweden.

Although her routines look effortless on the ice, Blake puts serious training into perfecting her performances. Skyliners practice on the weekends at Chelsea Piers in Connecticut, as well as during the week at Sport-O-Rama in Rockland County. Commuting to these practices doesn’t stop Taylor from continuing to work on her skills as she practices on her own for 2-3 hours on the ice Monday through Thursday. She also works out on Monday, Tuesday, and Thursday with her personal trainer for 1-2 hours after skating. Lastly, on Wednesdays, Blake does ballet for an hour once she has finished skating for the day.

This intensive training schedule has paid off for Taylor and the Skyliners in most recent competitions. Blake has skated in Switzerland, Austria (twice), Croatia, and Germany for competitions. This year her team was sent by the USFSA to compete in Salzburg, Austria during February break and Berlin, Germany during the past midterm week. Most recently, Blake competed at nationals in Portland, Oregon against 12 teams, where Skyliners came in second, and was named as team USA 2 to compete at the World Skating Championships in Stockholm.

Hopefully, all of this preparation will continue to lead to a great result for Taylor in her upcoming world competition.