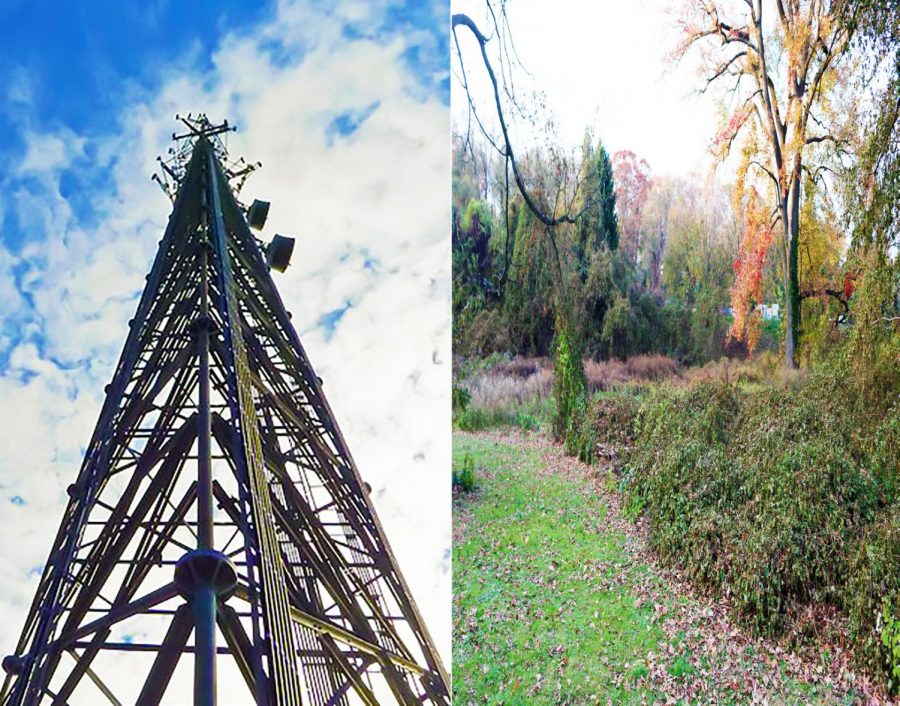 (l) A 130-foot tall cell phone tower similar to this one may soon be casting its shadow across PMHS. (r) the plot of land opposite Pelham’s sports field on which the tower may be built.

The New York State Department of Transportation has proposed a 130-foot cell phone tower to be built on land near Exit 9 of the Hutchinson River Parkway. Multiple Pelham groups have written letters in harsh opposition to the plan, including Mayors Michael Volpe and Jennifer Monachino Lapey of the Village of Pelham and the Village of Pelham Manor, respectively, as well as Superintendent of Schools Cheryl Champ and the Board of Education.

The plan proposes the monopole to be built on land east of Exit 9 on a patch of Department of Transportation (D.O.T.) land currently filled with grass and trees. The area sits directly across from Ingalls Field, a multi-use high school and middle school field, and short up the road from both Pelham Middle School and Pelham Memorial High School.

The proposal would require a fenced in area at the base of the tower, where maintenance materials would be stored. New York State would have antennas located at the top of the tower, with Verizon Wireless establishing antennas at 120 feet.

In a letter to Terrence Donoghue of the New York State Department of Transportation, Champ and the Board of Education expressed their strong opposition to the proposal. Primarily, they cited safety issues for students at the intersection of E. Sanford Blvd. and Colonial Ave.

“The installation of such a large telecommunications facility would be an increased hazard for our students, especially during construction and servicing,” the letter said.

The letter secondarily referred to concerns of the project reducing green space in Pelham and becoming an eye-sore in the community.

“There is a severe lack of green space in our community and construction of the monopole would represent a further reduction,” the letter said.

The land included in the proposal is officially owned by the Department of Transportation. Thus, the Town of Pelham does not hold the final say in the matter.

“I must note that at 130 feet, the monopole would be more than twice the allowable height in any zoning district in the Village of Pelham,” Volpe said in his own letter to Donoghue. “Relocating elsewhere may offer tree cover for at least the lowest ⅓ to ½ of the monopole.” The D.O.T.’s state authority supersedes that of Pelham, so the violation cannot stop the project.

Donoghue has not responded to multiple requests for comment on the subject or the project as a whole.

Assemblymember Amy Paulin from the 88th assembly district cited concerns about the need for increased cell coverage by the state in her own letter.

“We haven’t heard about a need for a cell tower,” Paulin said. “Usually if there’s a problem, I hear about it.”

“I’ve had three follow up calls with the commissioner of D.O.T. [Paul Karas],” Paulin said. “We have discussed our concerns and he is very aware of them. He is working hard to address them.”

The Department of Transportation offered to send officials to attend a Village Board of Trustees meeting to discuss the project. They have since set a date and canceled, according to Champ.

“Mayor Volpe invited them to come; he gave them dates to come to village meetings,” Champ said. “They have declined to actually commit to coming.” Champ noted that she and the Board of Education both aim to attend any such meeting.

“I believe there will be some amendment to the plan,” Paulin said. “Nothing has been completely resolved yet.”

If the proposal is approved, the district anticipates certain actions to guarantee students’ safety during construction. According to Champ, this would likely include a coordination about construction schedule and working with the Pelham Police Department and crossing guards.
…..The district has worked with the Department of Transportation in the past regarding construction projects. During the ongoing construction on the E. 3rd St. Bridge and the Hutchinson River Parkway, the D.O.T. coordinated construction and closures around athletic schedules, most notably during Homecoming weekend.
…..”They have been collaborative in that way,” Champ said. “I would anticipate the same kind of collaboration.”