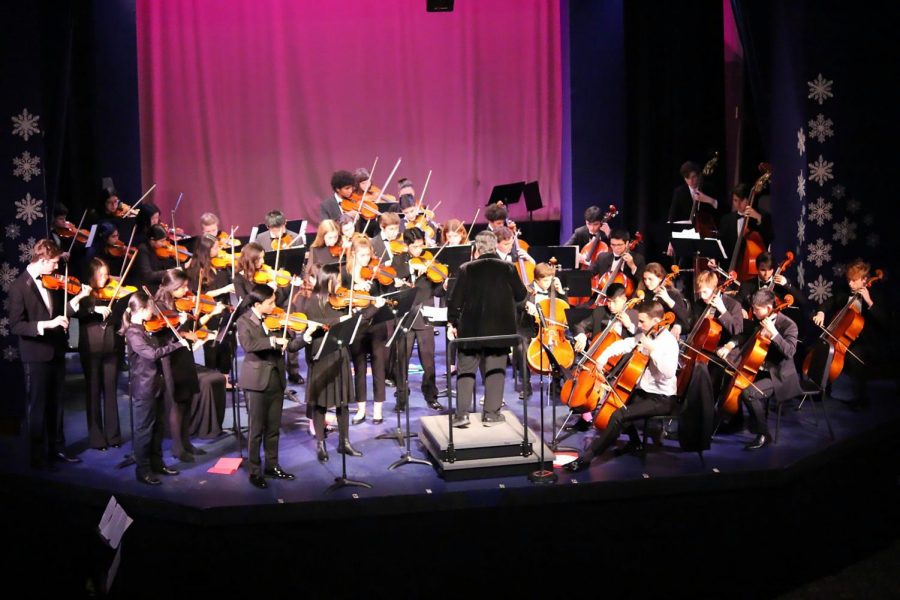 Dr. Zanky and the orchestra entice the crowd with their rendition of “A Mad Russian’s Christmas.”

Music drifted through the halls as the orchestra held their annual Winter Concert on December 16 in the auditorium. The variety of songs included Ase’s Death, Concerto for Two Violins, Libertango, Trio Sonata, Pavanne (pour une Infante Defunte), Symphony #8 in G major, Best of Queen, The Christmas Song (Chestnuts Roasting on an Open Fire), and A Mad Russian’s Christmas.

Conducted by Dr. Zanky, the songs ranged from somber and melancholy to exciting and invigorating. It was clear that the audience thought there were some clear stand-outs, but the orchestra members had some favorites of their own.

Sophomore Ann Liu said, “The Nutcracker [Mad Russian Christmas] was my favorite piece to play because the addition of lights filled the room with energy, and everyone had fun playing it.”

Clearly others agreed, as the light show at the end of the concert that accompanied one of the more fun songs of the evening left had the audience cheering

Freshman Audrey Levensen said, “[my favorite piece was] Libertango because it sounds great when the group plays it together and it makes everyone just want to start dancing and ‘rock out’.”