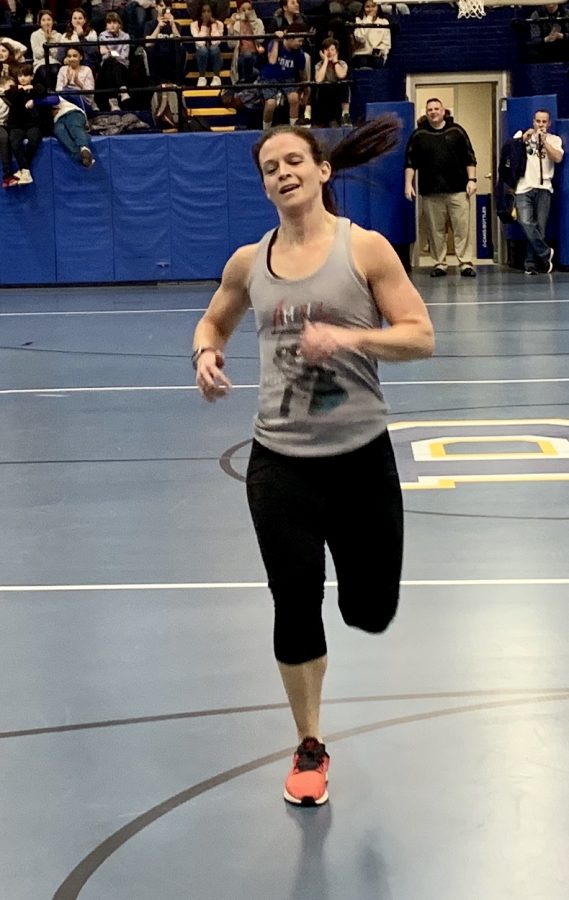 Mrs. Lucas runs to the finish line of her 100th lap of the Pacer in a fundraiser for the Mr. Roks scholarship.

Teachers lined up on March 4 in the High School gym to run the dreaded PACER test. The PACER Test (Progressive Aerobic Cardiovascular Endurance Run) has participants run back and forth as many times as they can between two markers, using an audio CD to guide their pace as a test of stamina.  Students filled the gym to watch their teachers sweat and suffer , but all for a good cause: to honor the late Mr. Roksvold, a beloved Pelham Middle School earth science teacher and high school golf coach, who passed away this summer and raise money for the Roksvold Scholarship. His family and the school have since worked to create the scholarship, which will be awarded to a senior in June. This PACER event, organized by the teachers themselves, cost $5 to attend in order to raise funds for the scholarship.Physical Education teacher Ms. Lucas won the competition, making 101 trips across the gym, but in the end, it wasn’t about winning the competition for her, rather it was being able to venerate an old friend.

“It felt terrific to run and honor Mr. Roksvold. He was a major presence in our school and is sorely missed. He was a coach, colleague and friend to all of us…As a former sprinter in college and having just run the NYC Marathon this past November – it was a perfect mix of speed and endurance! I will say – watching it as a teacher sure does look easier than it actually is. I give the students a lot of credit for how well they perform each year,” Lucas said.

In addition to the event, Mr. Finegan also sold “Golf Roks” shirts in Mr. Roksvold’s memory, with all proceeds going to the scholarship fund.

“When we decided to make it a fundraiser to honor Mr. Roksvold, it took on another level of meaning. There is nothing better than when our family of teachers comes together for a great cause – if a teacher wasn’t running, they were there to support or bought a t-shirt,” Lucas said. 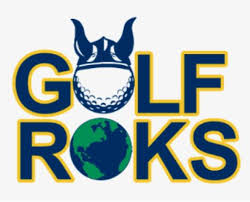