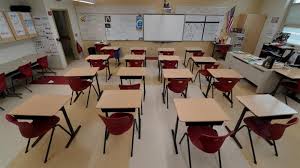 As the number of reported COVID-19 cases continues to decline in states across the US, the country is anxiously awaiting to resume normal life. But after months of everyone being warned of the dangers that come with human interaction, and the safety in staying home, just how normal will that life be? Undoubtedly, schools will be one of the main targets of new regulations and procedures post quarantine, but to what extent will these measures go, and how will states ensure that the consequences they may carry don’t outweigh the potential benefits?

The most radical potential change would be a complete shake-up of the entire K-12 schooling system. It is possible that after seeing how students and teachers were able to continue learning remotely with technology, that some districts may opt to make this their de facto method of education. This would give students greater flexibility with their schedules, as well as a more self-driven learning experience without someone to constantly chide them. Additionally, this move would likely save schools massive amounts of money as actual school buildings, and the facilities within them would become mostly obsolete. However, there are a large number of drawbacks to this idea. First, studies have shown that online learning is not nearly as effective at helping students retain information compared to a traditional classroom setting. An experiment done by the American Institutes for Research and the University of Chicago Consortium on School Research concluded that students who took an online course compared to those who took an in-person class were more likely to score lower. Online school also allows kids to be more distracted than they ever would be in a traditional setting. Without someone constantly monitoring them, nothing stops kids from being on their phone during a class, or even worse, not being present. Additionally, and perhaps most importantly, schools give students their best training with interaction and social skills. Take that away, especially from younger children, and the consequences could be severe- a generation of people who do not know how to properly act, talk, or treat others.

What’s more likely than a complete reshaping of schools are reforms designed to limit interactions. This could mean that schools may have to redesign the layout of their classrooms, including spacing out desks and eliminating large gatherings of students. This, of course, would have a domino effect of limiting class size, and thus class availability. Schools may also mandate that students wear masks or other protective clothing at least for the first few months of school, as well as heavily emphasizing the importance of handwashing multiple times a day. It’s also possible that schools may block group students as blocks and have them move as a unit throughout the day rather than the traditional approach of having different students in each class. How will these changes affect learning? For one, kids may find that they are more focused with fewer kids in each class, and the same people around them all the time. On the other hand though, at a certain point, these regulations may begin to feel oppressive towards students as they are limited from seeing certain people during the day, and it is likely that their movement around the school would be heavily scheduled and monitored, which could end up affecting student satisfaction, and consequently learning.

Safety will always come first when it comes to schools, that’s how it was pre-COVID-19, and that’s how it will be after. The trick in this situation is to find a balance between effective and overbearing education procedures. There’s no point in reopening schools with methods that make it harder for students to learn when online learning is still an option. It’s possible that schools may not even open come September, but eventually, they will have to. When they do, however they do, one thing is certain- they will never be the same.