100 Years Of PMHS: What Needs To Change 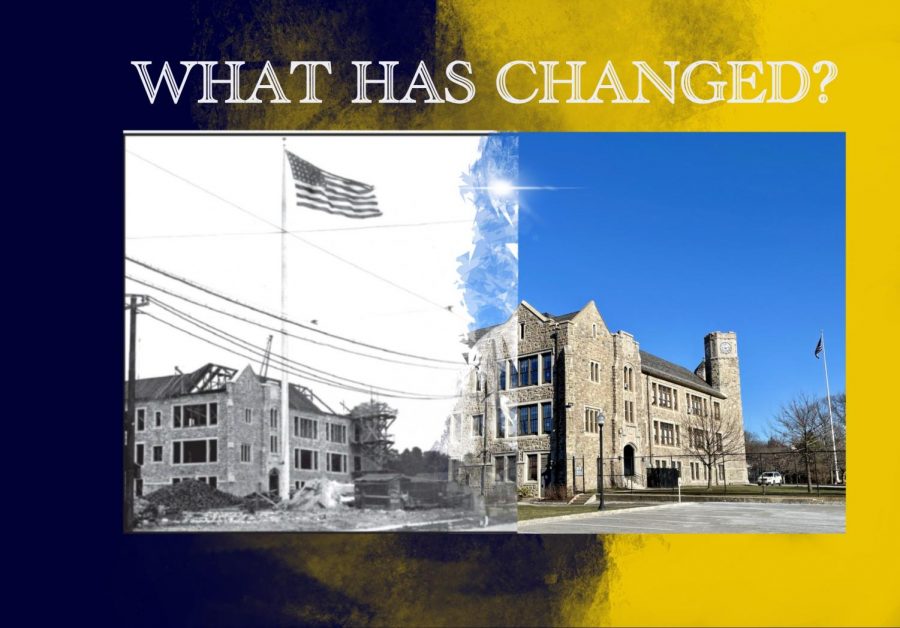 Few people approaching the castle-like facade of the high school can help but be impressed by the majestic structure. It is a source of pride for the community, and next year marks an historical moment — the 100 year anniversary of the completion of construction of Pelham Memorial High School. On May 6, 1922, the largest high school in Westchester (at the time) was finalized. The building was purposefully left unfinished on Corlies Avenue and Franklin Place to allow for annexation once larger enrollments of students arrived. Over the many decades, several renovations have been completed to upgrade certain aspects of the school to be more advanced and have more availability to a wider range of students. However, with this momentous anniversary approaching, have the building’s amenities and facilities been adequately updated to adapt to the 21st Century? The newer middle school facilities, built in 2006, serves to highlight problems that have not been addressed in the high school. Discussion of the potential addition of gender neutral bathrooms in the high school have further brought to light other problems and concerns that have yet to be fixed.

Over the last few years, many issues have arisen regarding the PMHS building’s physical facilities. Student enrollment has grown over the past several years. This, coupled with the fact that the pandemic requires student seating to be socially distanced, the school district must consider adding more classroom space to the building to accommodate both this fluctuation in class size and safety concerns. This year, numerous classes have had to switch classrooms on a frequent basis due to the lack of available space. For example, the science research department, which has grown in size considerably, has been transitioning between Alumni Hall and “the blue room” this year. Additional classrooms would benefit students and teachers alike, but it is crucial, especially now to keep students and faculty safe during the pandemic. In order to partially address this, PMHS has already begun a transition, as former district offices on the first floor are being relocated to be converted into classrooms, but further action seems necessary.

Next, the high school has been without proper air conditioning and an efficient heating system since its initial construction. In the boiling late spring/early summer days and the frigid winters, classrooms often reflect the same outdoor temperature inside. Moreover, when it starts to get hot outside, the only resort to cooling a balmy classroom is by opening the windows or by having a fan in the room. Installing air conditioning would be expensive but it would be worth it to keep the students and staff cool as the school year winds down. While implementing a better form of heat is not as urgent, the radiators currently in the building can be very loud when the temperature is slowly increasing in the classes. This noise can sometimes interfere with the learning atmosphere as teachers try to speak over the radiators. With the fluctuating temperatures each season and especially with global temperatures rising, it is most important that the school is prepared to keep classrooms comfortable and temperate.

Finally, PMHS students have recently created a petition to gain support from their fellow students to have the district implement gender neutral bathrooms in both the middle school and high school. Paramount to education, students’ safety, health, and comfort while in school should be prioritized by the school district, especially now as the COVID-19 pandemic rages on. Many students feel frustrated with their lack of representation in basic school forums and believe that they should not be confined to identify as one gender. While this proposal would not require the layout of the building to be changed, several pre-existing male and female bathrooms can have their titles changed to accommodate gender neutral students.

Pelham is lucky to have an amazing school like PMHS, but its age has brought considerable issues and concerns that should be addressed in the near future. Student and faculty wellbeing is at the forefront of the district’s initiatives to create a safe and welcoming environment for all.