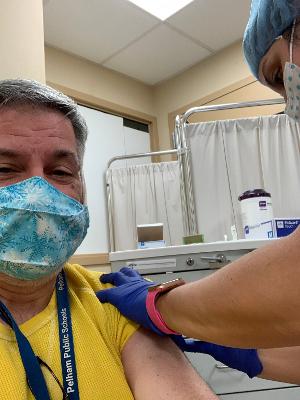 The only thing needling Mr. Schleifer is the Moderna vaccine, which he had no qualms about receiving.

During the global pandemic, one of the biggest problems the US faced was getting students back in school. One issue was that some school staff may be at higher risk for the virus and that students, who may be asymptomatic, would spread the virus at a more rapid rate. Due to the nature of their jobs, teachers and other staff members were deemed front-line workers and were some of the first in line to receive the vaccine.

According to CDC statistics, as of April 6, nearly 80% of teachers, staff members, and childcare workers have been vaccinated in the United States, and that number has only grown since then. In PMHS many teachers also got the opportunity to receive the vaccine. But, with any new or experimental treatment, there might be cause for concern. So, were Pelham’s faculty worried before going for the shot?

“No, I wasn’t, I read a lot about the brands and researched side effects prior to getting it,” said English teacher Mr. Beck. After the first dose of the vaccine the only side effect he felt was soreness at the point of insertion, with similarly mild side effects, including a sore arm and slight fatigue, after the second and final shot.

Another Moderna vaccine recipient was English teacher Mr. Schleifer. Was he concerned about any potential side effects?

“Not at all,” Schleifer said confidently. “As a child I was vaccinated for measles, mumps, German measles, and polio, I strongly believe in science and have no worries.” Like Mr. Beck, he stated the only side effect he endured was the sore arm.

Due to the quick release of the vaccine, some are concerned about long-term, and currently unknown side effects, but Schleifer said, “I’m 58 years old, I don’t know how many long-terms I have!”

While both Mr. Schleifer and Mr. Beck got the Moderna vaccine, other teachers such as Ms. Connolly got the Pfizer vaccine. Though the branding of the vaccine was different, the side effects were similar: a sore arm after the first dose, though after the next dose she felt fatigued and had a severe headache. Still, she conveyed that the slight discomfort was worth the risk.

“I felt it would protect me and also thought it was important for me to do my part to help with the global pandemic,” Connolly said.

As the country recovers from the past year of the pandemic, Pelham students and teachers are doing their best to help the return to normalcy by getting the vaccine.