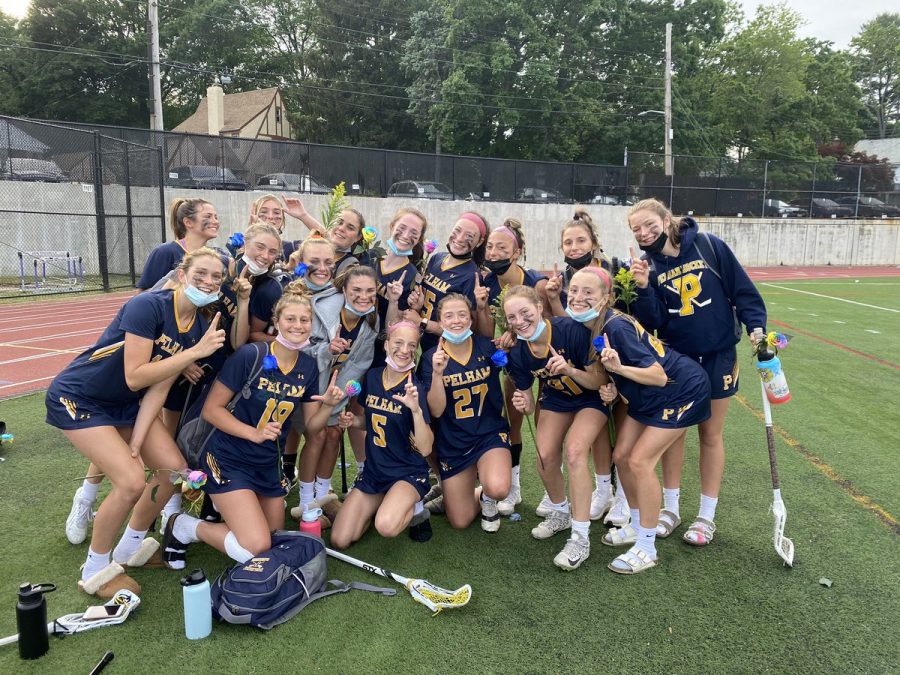 Pelican Girls Lacrosse went 9-1 in their league season, with their only loss to Rye High School. The team was led strongly by seniors Molly Terraciano in goal, Alex Orlando, Claire Deeney, Emily Maher, Jenna Lavan, and Jane Dunbar. Varsity had an overall record of 9-6 securing league champions with their win against New Rochelle on June 3. JV ended their season 7-5-1 overall.

The team lost their first five games by one of a couple of goals, leaving them 0-5. But as the season went on they kept positive and continued to grow as a team. In the next 10 games, the girls went 9-1 and beat second-place Ursuline twice to secure their spot as league champs.

“We played some of the toughest competition in the entire section right out of the gate, but they knew they were playing them and getting better each game,” PMHS Girls Varsity Lacrosse coach Kaleigh Howe said.

On May 29, in a win against Harrison High School, Molly Terracrano recorded her 400th high school career save. She had over 140 saves in the season. Emily, Claire, Jenna, Jane, and Alex had 113 combined goals.

“Even without playing Junior year, I was really proud that I was able to get 400 saves. I love my team and would not want to play with anyone else,” Terracrano said.

“This group of seniors were very special, they left behind a legacy and big shoes to fill. They’ve set the tone for what Pelham Lacrosse is all about,” Coach Howe said.

The team played No.4 Hendrick Hudson away on June 8, at 4:30 in the Class C quarterfinals. After several rain delays, Pelham lost 15-5. Earlier in the season, they lost to Hen Hud, 12-8.