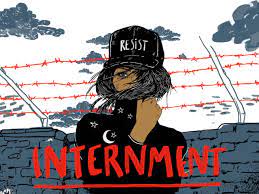 Internment is a young adult novel written by author Samira Ahmed about a world similar to our own, except with a highly islamophobic government. The protagonist Layla Amin and her family have been sent to the internment camp, Mobius. Angry over being discriminated against and silenced, Layla leads the fight for freedom against her oppressors with the help of other prisoners at the camp. The story is an emotional journey, bringing the reader into a world that is scarily similar to our own and warns us about holding onto our prejudices, inevitably repeating history.

This book was an interesting read. Ahmed draws the reader in with the idea of a world similar to what we have studied in history class, and the concept itself is devastating, yet exciting, to read about. Watching characters rise up from an oppressive system and taking down malicious people in the end keeps the reader on their toes and makes the book a true page turner. I liked the allusions to WWII and the concentration camps throughout the book as well. These parallels helped give a visual of what these characters experienced and the severity of their stay at the camp. However, Internment is not perfect.

The world that is established in this novel doesn’t feel fully formed. While reading the book from start to finish, I couldn’t stop wondering why the government had suddenly become so against Islam and Muslims. There is not a true explanation and since the setting of this story is at around the same time as our present, I kept thinking of what the catalyst of this “national threat” was. The other issue I have with this book is with the actions of the main character, Layla. She is the person who the author wants us to side with and the one who leads the rebellion, yet there are times at which I don’t particularly like her. She constantly risks her family’s life in order to share a few moments with her non-Muslim boyfriend. There are times at which I feel angry that she has been selfish, given that she is a character who is supposed to be giving and saving others.

Internment is definitely worth the read. The novel creates solid characterization, with characters such as Ayesha, who is Layla’s best friend in the camp and a loveable and relatable character who is easy to become attached to, in addition to characters such as the director of the camp, who is a great character to hate and root against. The story is both chilling and inspiring and if you’re in need of a quick and captivating read, I’d recommend checking out Internment.