Why are Male Politicians Creating Legislation that Affects Women’s Bodies/Lives? 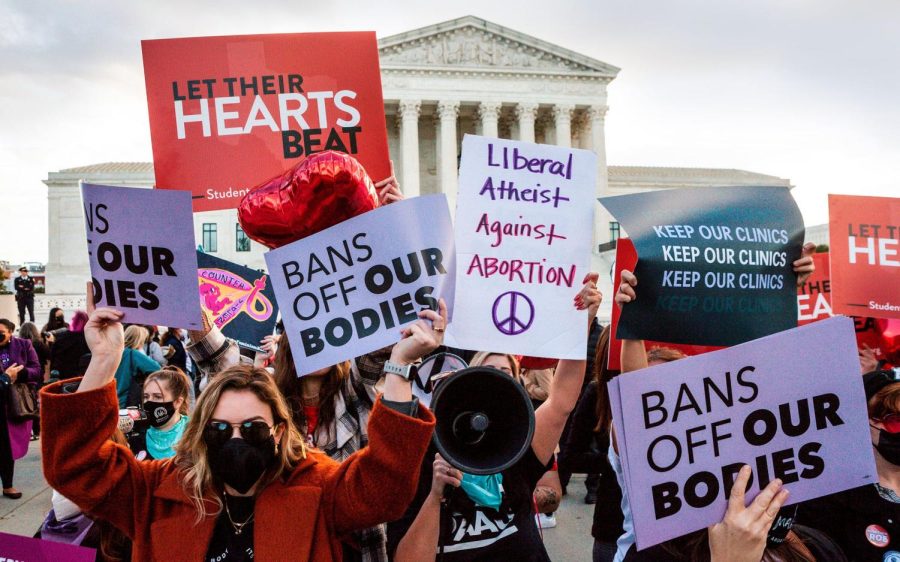 Men have been making laws about what women can and can not do for a long time in society. Their opinions have taken precedence over those of women for the majority of time, despite the fact that these decisions mostly affect the lives of women. For centuries this was not even challenged, partially due to the so-called, “inferior role” that women have in society, as well as the fact that it is less common for women to be political figures. Even today when sexism is typically frowned upon, and women are said to be given equal roles to men, there are still countless laws passed regarding women’s rights that are determined by men. Why is this acceptable? Why should women in America specifically, an arguably progressive country, tolerate this? Only women should be permitted to have a say in policies that concern them and their quality of life. Allowing men to create, approve, mandate, and enforce these laws encourages sexism as well as normalizes the inequality that women face on a daily basis. It is absolutely ludicrous that in 2021, male politicians are enabled to share their opinions on how many rights women should have, specifically, whether or not women should be permitted to have abortions has become a big political statement within the two major parties. This is a topic that should not even be up for debate. Giving male politicians the power to have control over women’s rights is giving them full control of how women will be treated and what we are limited to do. A power like this is something that only a fellow female should possess, since there is no way for a male to realize the effects of the law since it is not them that the laws are concerning.

Since early civilization, men have claimed power in government, laws, and overall life, developing a patriarchal society. The best explanation for this is the fact that most men have a superior complex and believe that only the male gender is capable of leading and accomplishing things. When the United States government was established, it was a group of men who wrote the constitution The words “women” and “sex” are present in the Constitution, exhibiting the Founding Fathers’ prejudiced understanding of women as equal citizens. This document that governs law in America was purposely written by and  for men, which maintained the idea of fair rights under the law only for the benefit of the male authors and their privileged “equals”. As a result, women were plainly considered  unequal citizens, and consequently, not granted many legal protections that male individuals have. Additionally, it is important to consider the fact that women were not granted the right to vote until the 20th century. If they had a say in the government and laws earlier, there may have been more laws that represent women. Having men in authority emphasizes the thought that women are less than equal and are undeserving of the same opportunities and limitless life males have. If those we elect to represent our country do not prioritize the equality of genders and develop laws that place limits on women’s bodies and rights, then it is impossible to fully eradicate sexism.

Not only do the majority of the males in our government tolerate sexism, but the representation of women in our government is unjust and unbalanced. The fact that the United States of America has never had a female president, and the first female vice president was in 2021 proves that many are opposed to having prominent female figures in politics and question the ability of women to lead a country. Today in 2021, the Senate only has 24 female members, the House of Representatives only has 119, and there are only 44 women who have served or are serving as the governor of a U.S. state. Having more women in politics can help enforce more legal protection for women in America, as well as equality in every aspect of life. It is hard for men to fully realize the oppression that females face, and therefore they often lack the incentive to mend our nation’s sexism. If there were more women in the government, less limiting laws, unjust rulings, and overall inequality would occur less often.

Currently, many restrictions on women’s reproductive rights have been placed and enforced in the United States and more specifically Texas as seen in Roe v. Wade case. The Governor of Texas, Greg Abbott approved one of the nation’s strictest abortion measures which forbid Texas abortions that are as early as six weeks, which is commonly before women know they are pregnant. Additionally, this law allows private citizens to sue abortion providers and others who played a role in the process (uber drivers, etc.). While signing the bill, Abbott said, “Our creator endowed us with the right to life and yet millions of children lose their right to life every year because of abortion. The Legislature worked together on a bipartisan basis to pass a bill that I’m about to sign that ensures that the life of every unborn child who has a heartbeat will be saved from the ravages of abortion.” No matter what his personal beliefs are about what is murder and what is not, he should not force on every citizen in the state of Texas. Not only is it unconstitutional, but it is sexist, binding, and can destroy the lives of thousands of women. There are plenty of valid reasons for abortion such as rape, age, health, and simply just not being ready to have the responsibility of a child. There should not be a law that forces one to be pregnant and bring a child into the world. No child should grow up being unwanted and no parent should be forced into having a kid. This law is simply just the effect of a man thinking he knows best about something that does not concern him, his body, or his life. It is so simple as to if it is not your body, it is not your choice. Abbott and the thousands of others in support of this law will not be the ones in pain, discomfort for the nine months of pregnancy and the birth, nor will they be the ones who will bear the burden of having to raise a child. Only women should be able to develop these laws since it is what the law will affect. The more laws as this one that is developed are sending the women’s rights movement backward in time and increasing sexism by the day. We can only hope that there will be change that will help the female population in America gain more rights, equity, influence, and political power.