OP ED: Should Parents be Charged for the Children’s Crimes?

Another School Shooting Leaves Us with More Questions than Answers 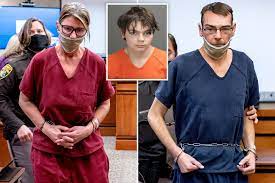 Ethan and his parents arrested.

School is found to be a sanctuary for some students to get away from issues at home or a place where they can learn and thrive surrounded by loving teachers and friends. For some, school may be the place they least want to be, but no matter how one perceives going to school, they should never think of it as their gravesite. There have been more school shootings in 2021 than in any other year since 1999. The tragedy at Oxford High School in Michigan was the 28th school shooting of 2021. This is appalling and shows the regression of our society and reflects the normality of violence in America. School districts and governments across the United States have been asking themselves how they can stop atrocities such as these from occurring and prevent innocent lives from being taken. However, they keep ignoring the answer that is right in front of them. One of the most constant and contributing factors that led to and allow a shooting to happen is the family of the aggressor. Is it finally time to hold the parents of a shooter accountable for the monstrous actions their child has committed?

The saying ‘the apple doesn’t fall far from the tree’ could not be more true in regards to violence. Any violent idea normalized or performed in the home can cause one to be blind-sighted to the harm of repeating this action outside the home. If a child grows up experiencing violence it becomes acceptable or normalized. In fact, their future actions will reflect what they have been taught. On the other hand, if a child is a victim of violence, they will most likely inflict it on others to cause them to feel the same way they have felt.

The gun used in the Oxford Shooting was bought by Ethan Crumbley’s father, James. He went on Black Friday to purchase a semi-automatic handgun as an early Christmas gift for Ethan. A store employee confirmed that Ethan Crumbley was present with James at the time of the purchase. The gun, Sig Sauer 9mm model SP 2022, is a gun with a proven track record of reliable performance in the hands of law enforcement professionals. Hence, this gun is not one for hunting or other recreational purposes, but one with the intent of killing people. This gun has a hair-trigger and can shoot and cycle quicker than others, which is why it is not legally sold anymore. It is hypothesized that James bought it through a private seller, showing that he was not only aware of his son’s intentions but also went to great lengths to make it happen. It is a federal law that no one under the age of 18 can have access to guns, which is already one law the Crumbley’s have broken since they bought the gun for Ethan and left it unlocked in the parents’ bedroom. This proves how the parents are responsible for providing their son with the means to accomplish the shooting he had been fantasizing about, and their negligence, which therefore caused lives to be harmed, lost and ruined.

What is even more alarming and disturbing about the parent’s actions and role in the shooting, is the fact that they had been warned twice about their son’s violent thoughts and plans. On Monday, the day before the shooting, when a teacher reported seeing their son searching online for ammunition, Jennifer Crumbley texted him, “LOL I’m not mad at you. You have to learn not to get caught.” Parents are supposed to give their children guidance on what is right and wrong and lead them down a path to be kind and good humans. Not only did his mother not dissuade him from his dangerous plans, but the only fault she found in his actions was that he was caught. This is both appalling and sick since Jennifer’s lack of concern is support and encouragement of Ethan’s intentions. The second warning they received was on the morning of the shooting, where the Crumbleys were urgently called to Oxford High School as a result of a concerning note. One of Ethan’s teachers had found images of a gun, a person who had been shot, a laughing emoji, and the words “blood everywhere” and “the thoughts won’t stop. Help me. My life is useless. The world is dead,” on a note. The school officials told the parents that it was essential they seek counseling for their son, but they refused since they did not want their son to miss school. They failed to even ask him whether he had the gun with him or search his backpack showing how they lacked concern for this grave matter. This was a cry of help from Ethan, and his parents left him at a time of need, dismissing his message as an ordinary occurrence and unworthy of attention. The lack of action the Crumbley’s took was a direct cause of the shooting since if they had simply acknowledged what their son was saying and doing, the shooting could have been prevented.

The actions James and Jennifer Crumbley did not take spoke louder than the ones they did take just simply too late. There is an overwhelming amount of evidence that shows that Ethan’s parents had ample opportunity to prevent the shooting. Only in the face of shots fired, did they speak up, which did no good. Justice must be served for not only the victims of the Oxford shooting but also for our country. If the Crumbley’s are not held accountable for their role in this abomination, then we will have repeated shootings. No punishment they will endure could come close to the price the students at Oxford High School had to pay, but holding them accountable will still set a precedent for other parents, so an atrocity like this one will be averted.