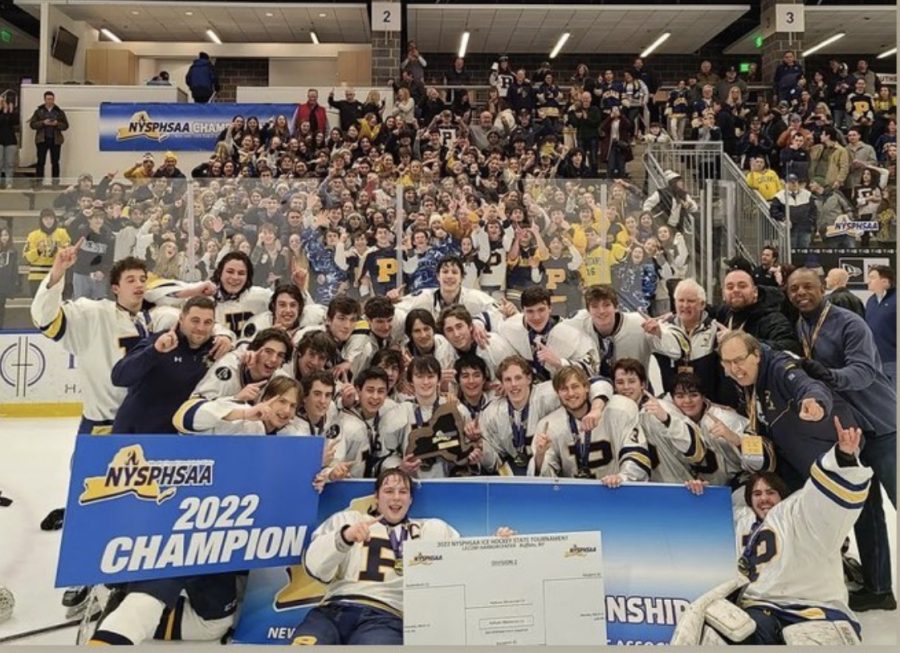 Flanked by fans, many of whom traveled six hours to support the team, the victorious Pelicans show off their state championship plaque.

Over the weekend of March 12-13, the Pelham Varsity Hockey team was victorious in their second state championship. The team was crowned Division II state champions after defeating Starpoint in the state finals in Buffalo in an exciting overtime win, with a final score of 7-6.

The team and many of its loyal Pelican fans ventured up to Buffalo for the semifinals and finals in a six-hour journey to watch the team. The team played in the LECOM Harborcenter, the practice rink of the Buffalo Sabers. In the semifinal game, Pelham got a fast start against the Queensbury team with two goals in 41 seconds. They went on to defeat Queensbury 7-1.

The next day, in the Division II finals, Pelham took down Starpoint 7-6 in overtime with a sudden death shot scored by team captain senior Ben Rosenberg.

“Scoring the overtime goal was a dream come true. It was a surreal moment when I realized the puck had gone into the net,” Rosenberg said.

At the end of the first period, Starpoint had the lead 2-1 with one goal from sophomore Griffin Evans. The second period, Pelham came back with three goals from Ben Rosenberg, junior captain Luke Green and junior defenseman Eric Elbery. Starpoint took the lead to end the second 5-4. It was quickly tied up in the beginning of the third with a goal by sophomore Will Crotty.

“The team this year was a true family, everybody got along, and the locker room was always lively,” Rosenberg said.

Junior Louie Marcellino, who received Division II NYS Player of the Year, scored a goal allowing Pelham to take the lead. Starpoint tied it up at the end of the third quarter, sending the game to overtime.

In a nail-biting sudden death, a Starpoint player was sent to the penalty box on a tripping call. The Pelicans were then able to capitalize on their opponent’s mistake. Louie Marcellino found Captain Ben Rosenberg across the ice in front of the net, where he scored the game winning goal.

“As for the future of Pelham hockey, this is huge. Already we are seeing more than 80 kids showing up to tryout for the Pelham youth hockey team when the turnout is usually around 40-50,” Rosenberg said. “This will translate to the varsity team as more kids in Pelham play hockey developing more talent for the varsity team.”

The town held a celebratory parade through Pelham on Saturday, March 26. The team paraded throughout Pelham and the Pelham fans came out to support the team.