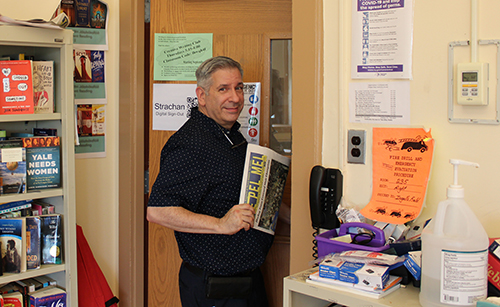 Mr. Schleifer grabs a copy of The Pel Mel as he moves on.

Neil Schleifer has been working as an English teacher at PMHS for ten years where he has taught
multiple grade levels, including elective classes such as theater arts. As co-moderator of
Sock ‘n’ Buskin he has co-directed nearly two dozen productions and has acted as co-moderator of Forensic Speech and Debate and the Jewish Culture Club. On top of this, he has been the advisor to The Pel Mel. However, as of the end of the year, Mr. Schleifer will be stepping down from his advisory role at The Pel Mel.

“Ten years is a long time to do anything,” said Mr. Schleifer. “I don’t know there are many people
that stay in one position for a decade without moving on to other things. It is very difficult given the
amount of time to put together a 12-page newspaper in six weeks, to be able to do all the things you
need to do.”

Mr. Schleifer will be using his newfound time to enjoy his home life without late-night fact-checking or hunting down people for articles, pictures, or graphics. After teaching the print journalism class for ten years, Mr. Schleifer has helped The Pel Mel win many awards and ends his term on a high note after being awarded first with one mark of distinction by the Columbia Press Association.

“It’s never about the awards, but about the mastery of the student-journalists. I am happy to say that over the years I have had former students reach out to me saying they are editors on their
college newspapers. I have had kids go on to be newscasters. The fact they actually took what we did
in the class that mattered to them, that to me matters most.”

Mr. Schleifer will be followed by Mr. Ferreri, of the social studies department, but still plans to be
involved with the paper next year to help make the transition smooth. Prior to Mr. Schleifer, Ms. Wasnetsky had served as The Pel Mel’s advisor.

Mr. Schleifer offered the following advice to his successor: “Be open. Listen to other people’s ideas. And remember first and foremost that this is a school newspaper and it is here to reflect the ideas and attitudes of the students.”