New Hutchinson Elementary School Planned at a Budget of $42M 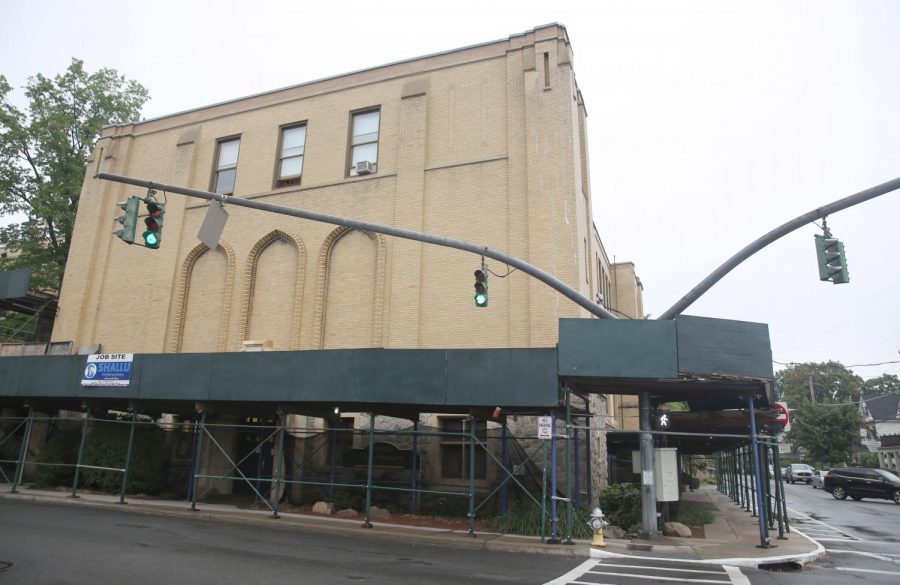 The exterior of the Hutchinson School is surrounded by scaffolding for the safety of the students and faculty.

Forty-two million dollars is no small price to pay for a new building, but the Board of Education has recently decided that this is the only option for Hutchinson Elementary school. Currently, a plethora of problems plague Hutchinson: administrators are struggling to address cracks in construction, the number of students is approaching maximum capacity, and class space is sub-optimal. Initially, a mere replacement of the school’s facade was suggested. However, after extensive reviews by the board of education and multiple architectural firms, Pelham’s School Board has decided to replace Hutchinson School as part of the Bond Proposal for spring 2018.

“It is past the point where Band-Aids will work,” said Mr. Davidson, president of KD&G Architecture.

The board hopes to present its final bond scope proposal, which will cover funding for capital improvements for the Pelham Schools, at a referendum on December 5. If all plans go through successfully, the district hopes to start construction in the summer of 2019 and the whole project is expected to take 3-5 years. According to the assessment of the building, the building faces no serious stability issues and is safe for students to remain in.

Superintendent of Pelham Schools Dr. Champ said, “It is less disruptive to build a new school than it would be to renovate an old school.”

There are multiple issues that make building a new school the best option. Since the elementary schools were built decades ago, the needs of the schools have changed. Currently, the gym serves as both a gymnasium and a lunchroom. Additionally, there is a kindergarten hallway with classrooms in the basement of the school. The façade’s deterioration has also taken a toll on the warranty of the building as a whole and has led to the final decision to build a new school.

Accessibility to the school for some students is also of concern. The Americans with Disabilities Act states that people with disabilities must have equal opportunities. This entails elevators, which Hutch currently does not have, and other safety upgrades.
This project certainly comes at no small price. A new, fully accessible, air conditioned school complete with a gym, cafeteria, and a multipurpose room is projected to cost 42 million dollars. According to a graphic presented at a Board of Education town hall meeting about the 2017 Bond Planning, an average 1% tax increase is expected. The average taxpayer would pay approximately 480 dollars more if they own a house with an average assessed home value of 810,000 dollars. Though there is an expected tax increase, average house assessments would also increase. Tax levy for a new building would also increase by 3%.

Debt service, or the total principal and interest paid through the life of a bond, would be about 1.9 million annually. Tax impact is an important part of the decision- making process and will have a large hand in the fate of the bond as it is worked on. The final bond will be voted on December 15 at the Middle School Library.

When considering the location of the new building, there are several possibilities in areas on their current property. Options include the lower playground behind Dunkin’ Donuts, on Hutchinson Field, or on the rock outcrop where a few portable classrooms currently reside. If the new school was built where the rock outcrops are near the parking lot, the portable classrooms would be moved onto the field to be used for music and art classes. Thus the field may be lost; it will either be used as a location for the new building or for the new portables.

Dr. Champ confirmed that students would go to Julianne’s Playground for recess as an alternative to the field. A new protocol would then be put in place to ensure that all students remain safe.

“Safety and education continuing on is the most important part,” said Dr. Champ.

When construction of Hutchinson is done there are a few options on the table for space. Areas that were taken over by construction, such as the field and the playground, would be restored. However, it has yet to be decided what will be done with the old school.
Superintendent Champ stated that the idea of developers remaking Hutch is one item of discussion, but may not be permitted by New York State Education Department. This option would be favorable because the money contributed by a developer to purchase the property could be used to cover some of the cost of construction. However, this may be unfavorable to people who live near the school.

New Construction of the Hutchinson Elementary School is a project that is elaborate and costly, but one that the Board of Education thinks will ensure the continuation of top-tier 21st century learning at the new school.